Honeywell RTH9580WF has been around for a while, but it is still an interesting example of a smart thermostat.

You might consider it to be an outdated model, yet there are plenty of reasons to give this Honeywell smart Wi-Fi thermostat a try.

It won’t fit everyone’s needs, but it certainly stands out in an increasingly crowded industry segment. In this Honeywell RTH9580WF review we will show what are those key differentiators so you can decide if that is the right smart thermostat for your home. 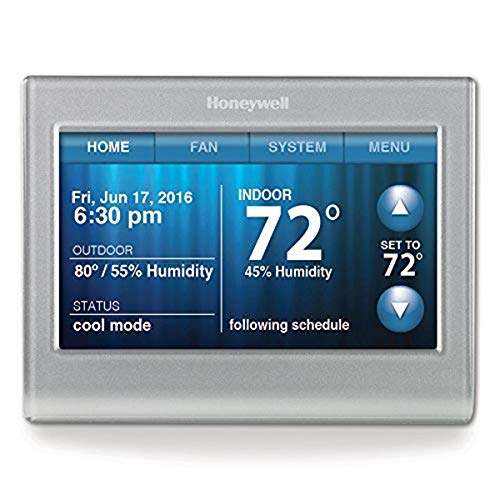 Perhaps the biggest thing that stands out when it comes to the Honeywell RTH9580WF is the full-featured touchscreen. This isn’t a combination clicking wheel device. It looks and feels just like the touchscreen on all of the latest Android tablets.

In spite of the fact that Honeywell once promoted the unwise fan wire hack to power their thermostats, the RTH9580WF features completely independent house fan control. You can run the fan anytime you’d like regardless of programming, which is a good way to save energy.

The Honeywell RTH9580WF can send out alerts via email. While it does have an app just like most if not all smart Wi-Fi thermostats, it can also use a standard inbox to notify you. This is perfect for those who either checks email on their desktops or have set notifications on their mobile devices.

Unlike other smart wireless thermostats, the Honeywell RTH9580WF doesn’t offer data reports to users. This might be a real issue if you were hoping to see exactly how much electricity you would save by changing certain settings. You could do the math manually if you wanted to, but this is something that many users expect that smart thermostats should be able to do.

Since the RTH9580WF is getting ready to celebrate a sixth birthday this year (2018), it might be showing that it might be quite dated product. Honeywell designed it at a time when there were very different ideas on what constituted a good smart thermostat, and this is somewhat obvious when you look at the user interface.

Perhaps due to its age, the Honeywell RTH9580WF lacks fine-tuning control over ranges on programs that have already been set. While this might not have been seen as too much of a limitation in the past, this is a feature that most users would expect to have these days. It might be an issue for you if you want to constantly revise temperatures you’ve set for the future.

Honeywell has heavily promoted the learning aspects of RTH9580WF thermostats, which work slightly differently from the competition. Rather than using a rigid program, the Honeywell RTH9580WF starts to heat or cool your home in advance of the scheduled time. Their marketing seemed to focus on cost as well.

If you don’t care for turning knobs and dials, then you might really like the user interface that this unit offers. The sleek design comes with a responsive touch screen that features indoor temperature, outdoor temperature, humidity, thermostat status and even something that resembles desktop wallpaper.

You can learn the linear menus fairly quickly if you’ve ever worked with any sort of mobile device. Longtime Microsoft Windows users might even pick up on them quickly, since they’re fairly close to a Start Menu. This interface is shared across a number of Honeywell devices, which makes it easy to learn if you’re moving from another unit.

Companion apps are offered for iOS and Android devices, which gives users completely remote control over the device. These apps can also help you configure email alerts if you’d prefer to use those. These alerts aren’t something that you would expect to get on a daily basis, but they’re a great way to get an instant warning if the temperature deviates significantly from a certain point. You would also get a message in your inbox if you ever had a problem with your HVAC system.

Setting the temperature is very simple, and most importantly the Honeywell RTH9580WF allows you to automatically switch between heating and cooling. While most people won’t need to do this very often since most climates are pretty steady with a cold season and a warm one, this might be very important to you if you’re using the RTH9580WF in a business setting. For instance, those who have to keep machines at a specific temperature might find that this is a useful feature.

Whenever the device is connected to the Internet, it downloads the latest temperature data from Accuweather so that you will know what the forecast looks for. This makes it easier to set a schedule. When you finally key in a schedule, you’ll be presented with two options. One is something like a calendar that you fill in with temperatures on specific dates. This is similar to the scheduling feature on nearly all modern smart thermostats.

You simply choose when you’d like your house to be a specific temperature while consulting the Accuweather data to find out whether or not your temperature settings make sense. While you won’t see the leaf icons that have made the Nest Learning thermostat so famous, you will see a good deal of practical information that will let you make wise decisions about energy usage.

Nevertheless, what sets the Honeywell RTH9580WF apart is the second option. Your smart thermostat can ask you a series of step-by-step questions and then set a schedule for you. If you find that you’re out of the house at various times during the day, then you might find that this an excellent way to reduce energy usage. The algorithm the wireless thermostat uses to set the schedule is robust enough to make sense out of the way you answer the questions.

This also takes the guesswork out of the scheduling process. If you found that you don’t enjoy setting a calendrical schedule, then you might want to give this a try even if it sounds a bit strange to you. You might find that it reduces energy usage drastically over settings that you pick yourself.

Honeywell’s Total Connect Comfort apps work with all of their Wi-Fi thermostats, so if you’re adding a new Honeywell RTH9580WF to a collection of smart thermostats the software should be able to control all the Honeywell products you’re working with.

You can view and change the schedule through the app as well as change the temperature instantly even if this goes against the schedule you set.The Honeywell mobile app also allows you to turn the fan on and off, which is good if you’re cutting down on air conditioning usage. In many cases, you can ventilate your house with the system fan and therefore turn the AC unit off.

This saves a lot of electricity because running the fan uses far less wattage than turning on an air compressor.If you have a humidifier or dehumidifier connected to your HVAC system, then should be able to turn this on and off through the app.

Not all hardware supports this feature, so you’ll want to check first before you give it a try. Ironically, the app even has a demo mode that Honeywell apparently thought would give users a chance to try out a new thermostat before they bought one. You probably won’t make much use of it considering that you wouldn’t install the app if you didn’t have a thermostat to begin with.

While Honeywell promotes their evohome thermostat line for multizone installations, the RTH9580WF comes with a major trick that makes it easier to use in this sort of configuration.

You’re able to give your thermostat a name the same way you could name a volume or system on a local area network. In fact, Honeywell encourages you to treat multizone thermostats something like a network. Once they’re all configured together, each will control a separate portion of your HVAC system.

You could name them after the areas of a building that they control, which makes it easier to find them later on. If you’re heating or cooling different levels, then you might want to number each of the smart thermostat based on what floor a zone is located on.

Unless you have a mansion, you probably won’t have this kind of an installation in your home but you might want to configure things like this in a place of business.

Like all smart thermostats, you should find that setting a schedule that dials down the amount of heat or AC used while you’re out saves a good deal of electricity. This is especially true if you have a habit of leaving your HVAC equipment running at all times.

New users will especially like the fact that the interview questions set a rational schedule for them. If you’re new to thinking about saving power, then this is a great choice because you might not yet know the best settings for your home. While the defaults might still be slightly off from the idea, they’re close enough to save power.

As well as the connectivity options provided by the mobile and browser apps, this unit works with the Wink home automation network.

If you have other devices connected to such a network, then you should be able to control them together from one central location.

It also works perfectly fine by itself, so you shouldn’t let the fact that you might not have Wink-compatible devices in your home discourage you from going with the RTH9580WF.

Ease Of Installation And Setup

Standard screw terminals in the back of the smart thermostat make it easy to install. You will need a C-Wire to use it, though, which means you might have to fish out an extra wire or use a third-party add-on to get your new unit to work.

Once you do have RTH9580WF thermostat connected, registration is a simple process that resembles the registration forms that come with most digital electronics. It’s every bit as thin as all of Honeywell’s other thermostats, which should help if you’re having difficulty with fitting larger boxes on your wall.

Users who are looking for the latest features as well as assurance that they’re picking sound temperature settings probably won’t like the RTH9580WF.

It was designed several years ago and clearly shows this fact.

If you’re looking for a simple and straightforward smart thermostat that you can control like a tablet computer while always getting constant updates on weather conditions, then you might find that Honeywell RTH9580WF is a right fit for you. 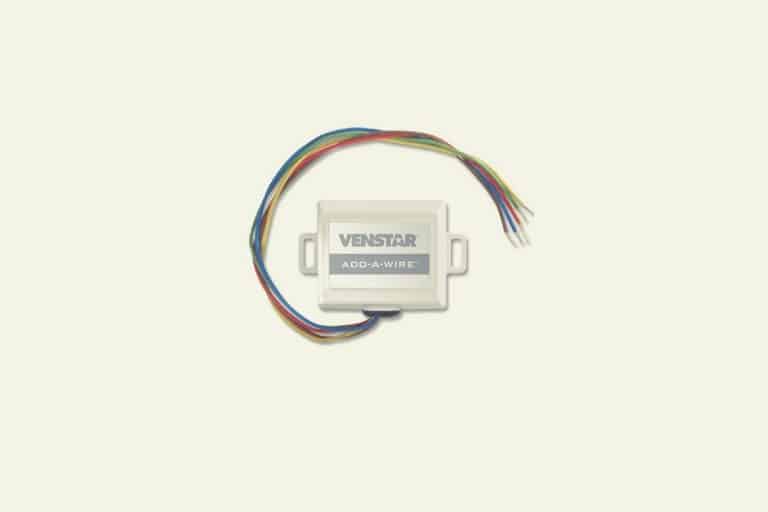 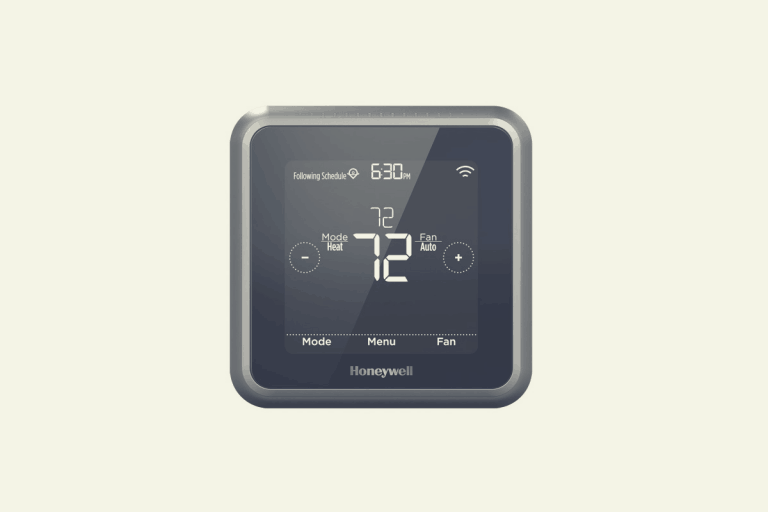